It was the final night for riders to accumulate points toward the upcoming Fast Fridays track championship and Bryan Yarrow and Greg Hooten Jr. grabbed each grabbed some winning main events in Division I at Fast Fridays Motorcycle Speedway in Auburn.

Yarrow, a tough competitor, has made the scratch main event almost every week this season and has the skills to beat anyone on any night finally put in all together winning the scratch main Friday night. Out of lane four Yarrow faced Tommy Hedden in three, Bart Bast in two and cagy Charlie Venegas in one. From the gate it was Yarrow’s race and the veteran cruised to a victory with  Bast and Venegas angling for position behind him waiting for a chance to pass. Bast was second, Venegas third and Hedden fourth.

Greg Hooten Jr. won the handicap main, perfect in all his races in the handicap program. Hooten, who was a regular at Fast Friday’s years ago took a three year break now back racing weekly without losing a step. Hooten, currently is handicapped at the 30 yard line, rode three great races to the win in the main event. “It feels very good, it’s my first main event win of the season, I was gone three years it’s too much fun I wanted to come back,” Hooten said. Iron man Louie Mersaroli was second and Daniel Faria was third.

Matt King emerged winner of the Division II main event. Several crashes in the main event mixed things up a bit. King managed to steer clear and won the main event. Will McCloskey was the first to go down, then Shawn Eldredge and Derik Denzin tangled and a restart was necessary without Eldredge and Denzin unable to continue with bike issues. King was first, Laurence McNutt was second and John Peters third.

Dean Newnham continued to be a force in Division III with another win in main event, his second in a row and third for the season. New to speedway this season Newnham won his heat race and then the main event. Another newcomer this season Rees Todd was second and John Peters was third.

Landon Norton topped the Youth 250 program with a win in the main event. Norton made it look easy winning both his heat races also. Dylan Wagner was second and Gregg Moore was third. Mike McGrath won the Youth 150 main event, followed by Colton Nelson in second place and Nick Hohlbein in third.

Fast Fridays now moves into its championship season with a shift to Saturday night events for the rest of the season. There will be no races for the weekend of August 23 then racing returns to the Gold Country Fairgrounds Saturday August 31 with the Fast Fridays Track Championships in all divisions and the Team SOS Challenge final. 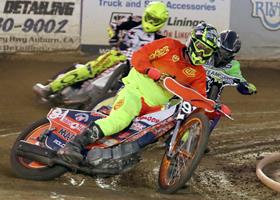 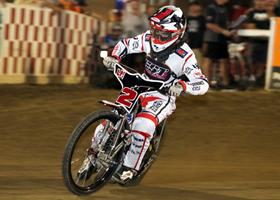 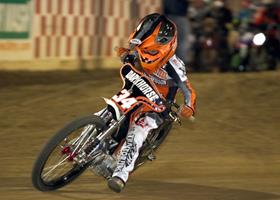 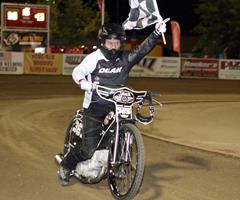 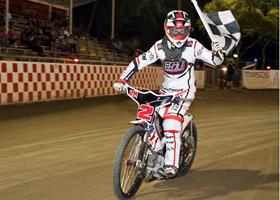 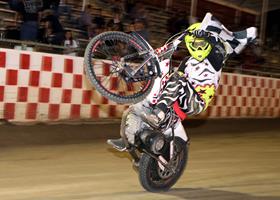 Bryan Yarrow celebrates with a victory lap Friday night after winning the scratch main event, his first of the season.

Greg Hooten Jr. celebrates on the winner’s podium after winning the handicap main event Friday night at Fast Fridays Motorcycle Speedway. It was the first win of the season for Hooten.