They braved a rain and electrical storm on Saturday night and a postponed start time on Sunday, but with the efforts of the Fast Fridays Motorcycle Speedway staff and the 12 sidecar teams that journeyed to Auburn for the first ever AMA sanctioned sidecar national championship the dream became reality. Sunday afternoon at the Gold Country Fairgrounds in Auburn the first ever AMA National Sidecar Championship was won by the sidecar team of Joe Jones and Josh Flammia.

Twelve teams came to Auburn for the historic event. The races scheduled for the evening of Saturday September 28 got underway but were soon canceled because heavy rains made the track unsafe for racing. The event was re-scheduled for Sunday September 29 at noon but was then moved to 3:00pm because of fairground events conflicts.

Finally the event got going and the racing was incredible, passing on the curves, a little bumping here and there and unbelievable speeds on the straight-aways. The fans that did come to the re-scheduled free event were treated to a great afternoon of high speed exciting sidecar racing. The teams mounted their three wheeled bikes powered by 1,000cc motorcycles, a driver and rider hanging off the back. Fifteen heat races were run scoring three for a win, two for second, one for third and zero for a fourth place finish. The three top scoring teams were then transferred to the national main event. The winner of a semi-final transferred to fill the final spot in the main event.

For the final the four fastest teams of the afternoon lined up to determine the national championship. The teams included Joe Jones and Josh Flammia, Chris Jones and Jonny Glover, out of retirement for the event Bryan Motis and Eric Hernandez and Robert Curry and Lori Curry. Jones and Flammia out of lane one got the best gate and got inside on turn one first. Coming out of turn one Jones and Flammia put some distance ahead of the others and just widened the gap as each lap was completed crossing the finish line first. Motis and Hernandez were second, Chris Jones and Glover were third and the Curry’s were fourth. Jones and Flammia finished the afternoon with a perfect score of 18 points winning every race they were in. “It has been a lot of hard work over the years to make it happen to finally have a national sidecar championship sanctioned by the AMA,” said Jones. “It was incredible weekend everyone pitched in to make it happen.”

Joe Jones is a longtime sidecar racer and held 14 US National Championships coming into the weekend’s race. He now claims 15 championships and with this win with Flammia the first national championship to be sanctioned by the American Motorcycle Association. Together they are the first ever AMA National Sidecar Champions. A big round of applause is due to all the racers and the Fast Friday’s staff that gave it their all and hung with the numerous challenges to present this exciting and historic event over the weekend. 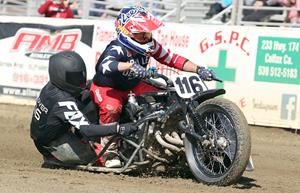 Robert and Lori Curry get tight in a turn during Sunday’s action at Fast Fridays. 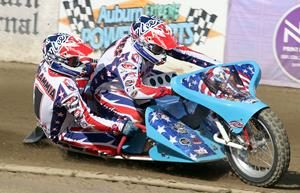 The sidecar team of Joe Jones and Josh Flammia won the first ever sanctioned AMA National Sidecar Championship in Auburn at Fast Fridays.

The start of the national final Sunday Joe Jones and Josh Flammia (near) won the final race and the national championship. 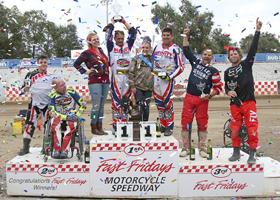 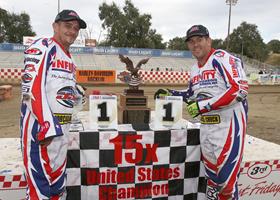