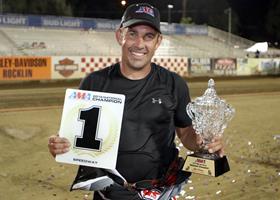 Billy Janniro secured himself a permanent place in American Speedway history winning an unprecedented 10th AMA National Speedway championship Saturday night at Fast Fridays Motorcycle Speedway in Auburn. With the win Janniro becomes the owner of a record that will stand for years and a record that will be very difficult for any other rider to equal, if ever. With no signs of letting up or even mentioning the R word (retirement), the 39 year-old Janniro capped another great year with the national championship win. “It was a great night, last year’s championship was unbelievable and I don’t even know what to think after this year,” said Janniro. “We will definitely be back next year, we have a great team together and it should be another great season.” After more than 24 years on a speedway bike, Billy “The Kid” Janniro carries the best national championship record and will go down in speedway history as one of the best if not the best American speedway rider of all time.

Janniro won all three rounds of the AMA National Speedway Championship series including the final Saturday night and came into the final with 39 points and finishing the series with 59 points. Saturday night Janniro scored nearly a perfect night with 20 points dropping just one point to Max Ruml in heat race two.  Trailing Janniro, Max Ruml 22, came into the third round with 29 points and finished the night with 17 points and a total of 46 series points for second place. Gino Manzaras 26, was third place in the national championship series finishing the three rounds with a impressive 36 points.

In the third round of the AMA championship series Saturday night Janniro was first, Ruml second, Aaron Fox was third and Bart Bast fourth. These four riders faced off in the Grand Final. They worked their way into the final by finishing the night as part of the top eight riders after 20 heat races. All the races were scratch races and the riders scored 3 points for a heat race win, two points for second place, one point for third and zero points for fourth place finish. The top two finishers of the semi-final transferred to the grand main event.  Janniro and Bast finished semi-final one first and second to transfer and Ruml and Fox finished one and two in semi-final two and also transferred to the grand final. Janniro won the final adding three points to his series total, Ruml was second, Fox was third and Bast fourth. The top eight finishers in the 2019 AMA National Speedway Series are automatically seeded in the 2020 national championship series without the need to qualify.

Janniro has a large target on his back and will need to stay on top of his game for next season if he’s looking for number eleven with young riders like Max Ruml and his brother Dillon Ruml (who was sidelined this season with a broken arm) Gino Manzaras, Russell Green getting better each season and chasing the now legendary champ. Also in the hunt don’t count out veteran riders like Bart Bast, Aaron Fox, Charlie Venegas, Bryan Yarrow and a host of many others joining the chase. Needed to be mentioned is the great season accomplishment of young Anthony Dion of Grass Valley. Dion 17, made a meteoric rise from the youth division just last season to a player to be dealt with in Division I, capping his season as a rider in the national championship series.

Also on the program was a youth program. Wilber Hancock won the Youth 250 main event and Levi Leutz won the Youth 150 main event. The season is winding down but there is still two more nights of exciting racing action. Saturday September 28 Fast Fridays presents another exciting night of championship racing as the AMA National Sidecar Championship rolls into Auburn. Saturday night October 12 the season closes with the finale USA vs. The World. Both nights will be fantastic. 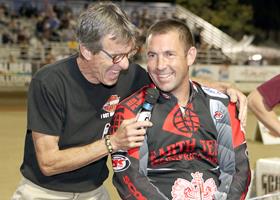 A confident Billy Janniro is interviewed before the beginning of the third round of the AMA National Speedway championship Saturday night in Auburn. 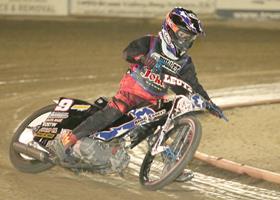 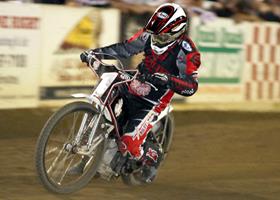 Billy Janniro won the 2019 AMA National Speedway championship winning all three rounds of the championship and finishing with 59 points. 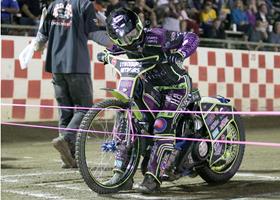 Max Ruml gave Billy Janniro a real run for the championship. Ruml finished the championship series with 46 points and the only rider to beat Janniro in a heat race Saturday night. 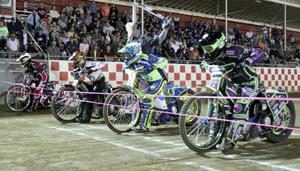 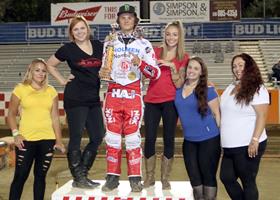 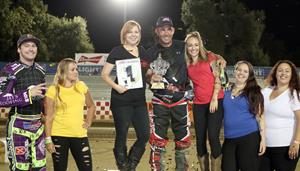