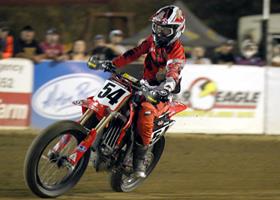 In a special event Fast Fridays Motorcycle Speedway welcomed the All-Star Flat Track Invitational to the Gold Country Fairgrounds in Auburn Ca. Saturday night. Sixteen flat track riders made Fast Fridays their home for the evening and on a track and in a format that is unique for flat trackers raced for a share of a $6,000 purse.  It was the final meeting of the California Cup Flat Track Championship series. Running the championship uniquely in a faster paced speedway grand prix format the action was non-stop.

The special race format pitted the 16 top flat trackers in 20 heat races each meeting each other at least once during the evening. In the all scratch racing format, four riders in each heat raced for points-three for a win, two for second place, one for third and no points for a fourth place finish.  The points were scored and the top eight riders after the 20 heats were transferred into two semi-final heats. The top two finishers in each semi-final were then transferred into the All-Star final race. The winner of this race would win the event.

Lining up for the finale, Kolkman had lane one, Halbert was in two, Rush in three and Brooks out in four. Halbert got a good gate and as most of the riders figured out real quick during the evening the start is everything in this racing format. Halbert got out front and held his position for the win, Kolkman was second, Rush third and Brooks fourth. It was a great night ending the series and all of the racers seemed to enjoy the unique format.

The Pro Flat Track Pro 250 Running of the Buls was another interesting event on the program and new to speedway fans that attended. Riders raced on vintage Bultoco motorcycles in three classes. Mike Inderbitzin won the professional division, Mike Mannion won the masters division and Chad Spurgen won the youth division.

Motion Pro of Rocklin sponsored a fun Dash for Cash elimination event with a $5,000 purse. Four riders lined up for a series of two lap races with the last place finisher being dropped from the contest until just two riders faced off for a final race. Kyle Kolkman and Mike Rush were the last two riders in the run-off with Kolkman winning. Rush was second, Sam Halbert was third and Hunter Brooks was fourth.

The event was the final race of the California Cup Flat Track Championship. Points in the series earned Mike Rush the championship, Kyle Kolkman finished second place and Sam Halbert finished third for the series. It was a great night of racing with the flat trackers in a different racing format running in a grand prix program.

Next week championship racing continues at Fast Fridays on Saturday September 21. The AMA National Speedway Championship Series Grand Final makes it way to Auburn. Nine-time national champion Billy Janniro is looking to win his 10th and unprecedented AMA national championship leads the series with 39 points. Southern California’s Max Ruml is second with 29 points and is not going to make it easy for Janniro. Gino Manzares follows with 28 points. It will be a great night of championship racing.

Running of the Buls (Vintage Bultaco)

Flat track riders line up for a rider’s parade and introductions as the All-Star Invitational California Cup got under way at Fast Fridays Motorcycle Speedway in Auburn.

Flat trackers racing Saturday night at Fast Fridays wasted little time getting used to the smaller track and GP championship speedway racing format during the final round of the California Cup championship series. 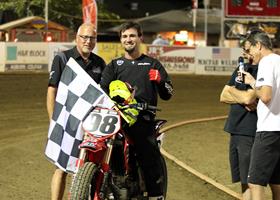 David Joiner (left) congratulates Kyle Kolkman after he won the Dash for Cash sponsored by Motion Pro and winning a large share of the $5,000 purse. 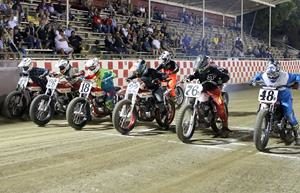 A heat race start in the Running of the Buls special event at Fast Friday’s Saturday night. 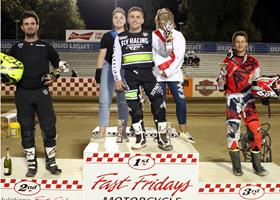 Mike Rush (center) finished third Saturday night but won the California Cup Flat Track Championship with the most points throughout the series. Kyle Kolkman (left) was second in the championship series and Sam Halbert (right) was third.