Everyone one at Fast Fridays Motorcycle Speedway seems to be getting back in the groove including speedway staff and the rider and the racing action is fast and exciting. As a rainstorm threatened the program continued Friday night at the Gold Country Fairgrounds in Auburn Ca. and full night of racing was completed.

Billy Janniro is back in full swing with his second win in two weeks in the scratch main event. Janniro, out of lane four, got inside on turn one and just held on. Max Ruml who left gate one at the start dropped in behind Janniro and gave chase along with Bart Bast but neither rider could make a passing move on Janniro and he wheeled across the finish line. Bryan Yarrow was in the hunt along with Ruml and Bast but fell in lap two and lost ground. Ruml was second, Bast third and Yarrow fourth. Janniro was again perfect in the scratch program with wins also in his heat race and semi-final race.

Newcomer to a 500cc speedway bike, young Anthony Dion is tearing it up at Fast Fridays. In just his third official race week off a youth bike, Dion held onto his lead and won the handicap main event. Though still on the zero line in the handicap program Dion has made quite an impression winning all his handicap races. It looks like he will be back on the ten yard line next week and look for a similar performance. This kid is going upward. “I’m speechless, it’s incredible, and the transition from the 250cc bike was easier than I thought it would be. The power is incredible,” said Dion. Bart Bast was second and Janniro was third.

Dion spent more time Friday night on the podium than anyone else in recent memory, picking up trophies for a first place win in the Division II main event and a win in the Trophy Dash. In Division II off the 50 yard line Dion was also perfect with a win in his Division II heat race. John Peters was second in the DII main followed by Sammy Tetrault in third. Hope the Dion’s have a extra room in the house for the hardware that is sure to be coming with Anthony’s exploits and his brother Timmy Dion still racing in the 250cc division.

On top of Division III Jeff Powell repeated his first place finish last week with a main event win this week. Powell gained another 10 yards with the win and will be getting familiar with the 20 yard line start position next week. Casey Cornilsen was second and Ray Holt Jr. was third. Kyle Cunningham took the Youth 250cc main event followed by Cameron Krezman in second and Landon Collins in third. Landon Norton took a fall last week injuring his shoulder and will be out for a few weeks. Also repeating his win last week Darren Armbruster won the Youth 150cc main event. Jameson Huteninson was second and Mike McGrath third.

The SOS Team Challenge team racing event renewed its rivalry with the first round of the 2019 season. This week’s Team Harley Davidson, David Shaw, Lawrence McNutt, Tommy Hedden, Ryan Bast, Billy Janniro and Charlie Venegas took on Team SOS members Jeremy Estes, Eddie Marsalla, Louie Mersaroli, Bart Bast, Bryan Yarrow and Russell Green.  The teams ran three races accumulating points racing in teams. The score ending up tied 9-9 for the first meeting. The team racing will continue with the points carried into each round. Round two is next week when the green and orange teams will square off again.

SOS Team Challenge Round One

Anthony Dion made three trips to the winner podium Friday night to pick up trophies for first place finishes in the handicap main event, Division II main event and the trophy dash. 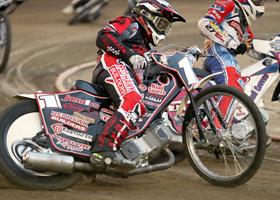 Billy Janniro is finding his groove at Fast Fridays with his second scratch main event win of the season. 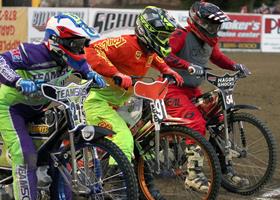 -(left-right) Lawrence McNutt, Matt King and Davey Shaw line up on the 50 yard line for action in Division II.

Darren Armbruster repeated as the winner of the Youth 150cc main event. 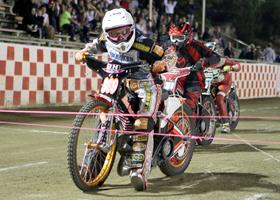 Jeff Powell was the winner of the Division III main event winner after a restart Friday night. 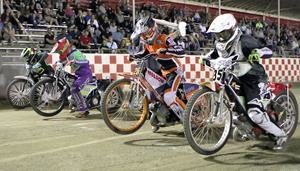 The start of the Youth 250cc main event (left-right) Landon Collins, Aidan McNutt, Cameron Krezman and Kyle Cunningham get off the line. Cunningham won the race.