Sidecars and Hooligans at Fast Fridays

After a week rain delay the Extreme Sidecars were welcomed by a near capacity crowd to the Gold Country Fairgrounds for their first appearance of the season at the Fast Fridays Motorcycle Speedway Friday night. The five teams of sidecar riders did not disappoint putting on a thrilling racing show on their three wheeled high powered chariots. The team of Joe Jones and Josh Flammia took first place in the sidecar main event, followed by team of Kevin Kale and Lori Curry. “It’s my first time riding with Joe (Jones), we had a blast, we’re still learning how to dance, Joe is incredible,” Josh Flammia, Joe Jones riding partner said.

Billy Janniro got back into winning form with his first scratch main event win of the season. Janniro was undefeated in the scratch program winning his heat race and the semi-final race. In the scratch main event and out of lane two Janniro got out ahead of Russell Green, Bart Bast and Charlie Venegas and held on to an inside position several bike lengths ahead of Russell Green and Bart Bast. Both Green and Bast making hard charges at the nine time national champion but Janniro held his lead. Bast was second, Green third and Venegas fourth.

In the handicap main event Bryan Yarrow who was also riding well Friday night got a good jump on the competition off the fifty yard line taking the main event. All the riders in the final were long yardage guys with everyone on the 40 yard line or further back, with Janniro nearly in the parking lot sitting on the 70 yard line. Bast and Janniro were the main challengers both working hard to catch Yarrow but without luck. Janniro made up the extra yardage and was second, followed Bast who was third.

Richard Perkins took the Division II main event but not without a real challenge from youngAnthony Dion. Dion who just recently made the move from the youth divisions to Division II and who won the DII main event last week finished second. Dion also in only his second night of officially riding a 500cc bike rode in Division I Friday night. John Peters was third.

Third Division was topped by Jeff Powell, followed by Dakota VandenBroeder in second and Jake Estes in third. The battle continued in the Youth 250cc division with Cameron Krezman coming out on top winning the main event Friday night.  Kyle Cunningham went down in a crash in turn one making a restart necessary and was unable to restart. Landon Norton was second and Timmy Dion was third. For the second week in a row Darren Armbruster took the Youth 150cc main event. Armbruster new to the Fast Fridays track has become the man to beat in Youth 150cc division. Also new to Auburn and up from Southern California Friday night was Owen Williams who made an impression with a second place finish in the Youth 150cc main event. Mike McGrath was third.

In the Hooligans V-Twin competition five riders showed up with their Harleys to test the dirt Fast Friday track. Any V-Twin was allowed street or race ready. All the riders rode great and it was James Drumond who won the main event. Will Hansen was second and Pete Dimas was third.

The action continues Friday night May 31 at Fast Fridays with the first night of the Team SOS Team challenge series.

The Extreme Sidecars, a Fast Friday’s fan favorite drew a near capacity crowd Friday night in their first of five appearances in Auburn. 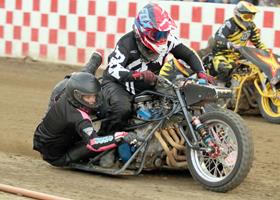 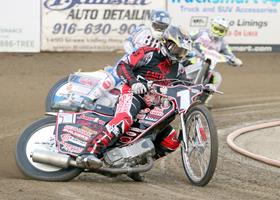 Nine time national speedway champions Billy Janniro got back into the swing of things with a perfect night in the scratch program including winning the scratch main event. 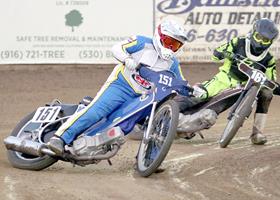 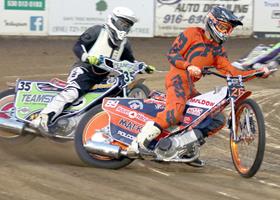 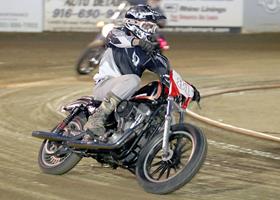 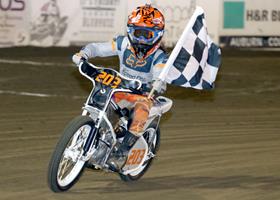 Darren Armbruster won the Youth 150cc main event for the second week in a row.