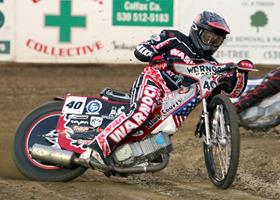 It was a full house at the Gold Country Fairgrounds in Auburn Friday night as speedway motorcycle race fans showed up to open the 2019 Fast Fridays Motorcycle Speedway season. Starved for the fast pace racing action absent during the off season fans got a real treat and a taste of what is to come this season.

Many of the riders looked a little different decked in new riding suits, but after a couple of races to get tuned up it was back to business. Auburn’s Tommy Hedden, a top competitor, put it all together right out of the gate and grabbed a win as the fastest man of the night in the scratch main event. Hedden got a good gate and after a little tight bump and go racing in turn one skillfully held on to the lead riding on the inside of the track. Hedden faced Bryan Yarrow, Billy Janniro and Bart Bast in the night’s finale. They all tried to get around him but Hedden was tough showing his years of experience and picked up the first scratch win of the 2019 season. “It is going good this season, lots of prep on the Warnock bikes (Hedden sponsor) it is just going to be a great season and this is a great way to start,” Hedden said.

Up from the youth division this season, skipping Division III and moving directly into Division II Anthony Dion showed he belonged turning in a winning night riding a 500cc bike officially for the first time.  Dion was undefeated for the night winning his heat race and then going on to win the Division II main event. Dion began his 500cc career on the 20 yard line and will add 10 yards to his start position next week. Look for Dion who has been at this for years in the youth divisions to be making his debut in Division I probably sooner than later. The young Dion definitely made an impression Friday night. Sammy Tetrault was second off the 40 yard line and Matt King third of the 50 yard line.

The Youth 250cc division continues from last year to be a battle between Cameron Krezman, Landon Norton and Kyle Cunningham, all seasoned youth competitors. Opening night Norton was the one to come out on top with the main event win, Krezman was second and Chase Kangas third. Nick Hohlbein topped the Youth 150cc field with a win in the main event. Fast Friday’s newcomer Darren Armbruster was second and Mike McGrath was third.

It was a great opening night with a packed crowd and a good sign of the exciting motorcycle speedway racing to come as the 2019 season continues. The Extreme Sidecars roll into town Friday for the first of four fast paced three-wheeled racing appearances. 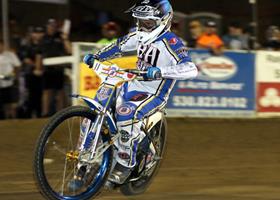 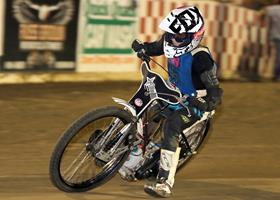 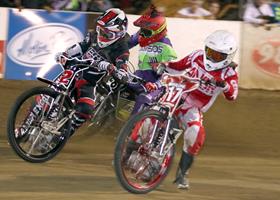 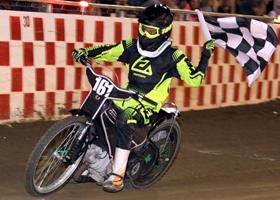 Anthony Dion had a great first night on a 500cc speedway bike. Dion, up from the youth division for the first season and riding in Division II and won the main event. 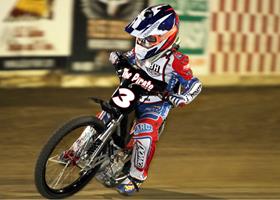 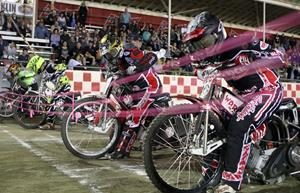