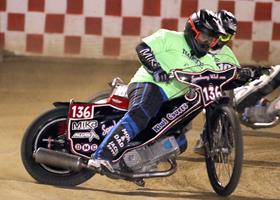 When the dust settled on the tricky dirt oval Friday night at Fast Friday’s Motorcycle Speedway in Auburn Ca. it was veteran rider Charlie Venegas who proved to be the fastest man of the night. Venegas, who makes the journey up north from Southern California each week to keep everyone on their toes, got lane one in the night’s finale. Venegas grabbed the lead in turn one and cruised to a first place finish in the scratch main event. Bart Bast and Russell Green did what they could to catch Venegas, but both were locked into their own battle for second and third place and at least a bike length or two behind Venegas the entire four laps. Bast ended up with a second place finish and Louie Mersaroli overtook Green for third, leaving Green with fourth place. Venegas was perfect with wins in his heat and semi-final races. “I guess tonight things were shinning my way, I did this one for Lilly, my little dog that I just lost,” said Venegas.  “It’s taken me three weeks to win this, machine is working good and through the night things were just going my way. The track was ruthless, you had to ride hard,” he said.

The big story at Fast Friday’s this season so far has been the riding career of young Anthony Dion who just this season made the jump from the youth program to Division II and onto Division I on a 500cc bike. Dion repeated his win last week in the handicap main event, this week off the 10 yard line. Dion is riding off the short yardage but he is using great skill holding off longer yardage guys for the wins. Russell Green was second, Bart Bast was third. Now it’s back to the 20 yard line next week and a little tougher time. Dion 16 currently rides in the Division I scratch and handicap programs and the Division II program.

Davey Shaw picked up his first win of the season in the Division II main event. Shaw was second in his heat race and transferred to the main event. Sammy Tetrault was second and Shawn Eldredge was third. Dakota VandenBroeder won the Division III main event, riding off the 40 yard line. It was the second win of the season for VandenBroeder and may be her last since she moves back to the 50 yard line and in two weeks will be leaving her speedway family to join the United States Army. Casey Cornilsen was second and new rider to Fast Fridays Rees Todd was third.

The SOS Team Challenge returned for round two with the SOS team breaking the 9-9 tie from last week and scoring a whopping 13 points to Rocklin Haley Davidson’s five points to bring the total score after two rounds to 22 points for Team SOS and 14 points for Rocklin Harley Davidson. Bart Bast, Bryan Yarrow and Jeremy Estes each scored wins and three points each for Team SOS. The team racing rivalry renews with Round Three on June 21.

Hold on to your hats Friday June 14 as those crazy adrenalin junkies Extreme Sidecars return to Fast Fridays for their second of five season visits. This event is a fan favorite and a not to be missed night of fast paced sidecar action along with a full speedway racing program. 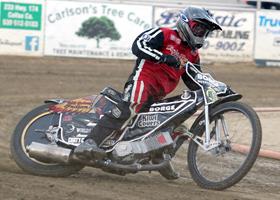 Fast Fridays crowd favorite Charlie Venegas put it all together in the scratch program winning the scratch main event. 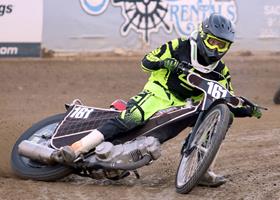 Anthony Dion for the second week in row won the Handicap main event. 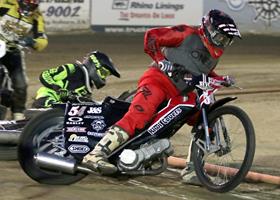 Charlie Venegas (right) lines up in lane one for the start of the scratch main event Friday night. Venegas won the race his first main event win of the season.

Dakota VandenBroeder stands on the winner’s podium for the second time this season winning the Division III main event.