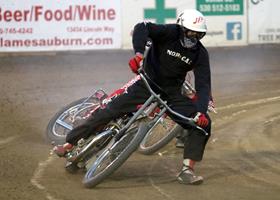 Watching Billy Janniro is almost magical. Again for the third week in a row Janniro ruled both the scratch and handicap programs winning both main events last Friday night at the Fast Fridays Motorcycle Speedway in Auburn.

In the scratch program it was again Bryan Yarrow who gave the biggest challenge to Janniro for the second week in row. Out of lane one Janniro grabbed the inside lane and worked the outside of the track on the straight-a-ways and back inside to the blue groove in the corners and Janniro just crushed it. Yarrow was second. Tommy Hedden was third and Charlie Venegas was fourth.

In the handicap program Janniro again starting on the seventy yard line and worked his magic moving through lower yardage traffic to get to the finish line just in time for the win. Hot shot Greg Hooten Jr., who was on fire Friday night finished second and Blake Borello was third. Hooten Jr., rides off the thirty, and Borello starts on the 40 yard line.

Paying homage to those who came to this wonderful sport in the early days of racing, Fast Friday’s presented Vintage Night. A special program of demonstration racing on vintage bikes was run and racing pioneer Mary McGee was honored.

McGee was a women’s racing pioneer, starting her career in a race car then making a change to motorcycles in 1960. McGee was the first woman in America to officially race in motorcycle in road races and motocross events breaking existing gender barriers. She raced professionally until 1976, and then began competing in vintage motocross races in 2000. McGee was inducted into the AMA Motorcycle Hall of Fame in 2018 and proudly showed off her AMA ring Friday night. McGee signed autographs greeting visitors and sharing stories of her storied career. She then was presented with flowers in the infield and her story was told. McGee stood in as a special trophy girl handing out trophies to division winners at the end of the evening.

Billy Janniro also won the vintage bike demonstration main event. Tommy Hedden was second, Bart Bast was third and LC Veale fourth. The older bikes sputtered and spit out some smoke but the riding was exciting and gave everyone in the stadium a glimpse of what speedway racing was like years ago. Even long time Fast Fridays announcer Mike Rooney got suited up and fired up his old J.A.P 500cc bike and ran a couple of heats of the demo.

Kyle Cunningham is making himself comfortable on the winner’s podium for the second week in a row in the Youth 250cc main event. It was a repeat of last week and his third main event win of the season. Cameron Krezman was second and Landon Norton was third. 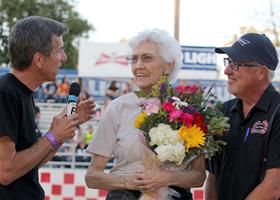 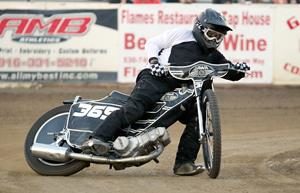 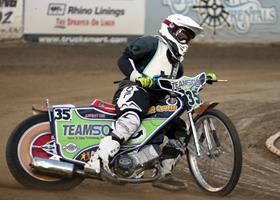 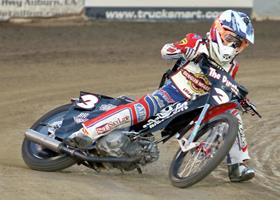 Fast Friday’s announcer Mike Rooney got into the action during the vintage night program riding the J.A.P. bike he raced years ago.

In top form and seemingly unbeatable during the last three weeks at Fast Fridays, Billy Janniro won both the scratch and handicap main events for the third week in a row. 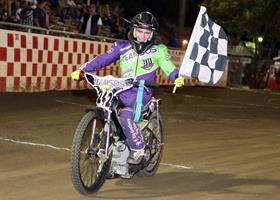 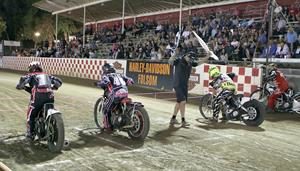