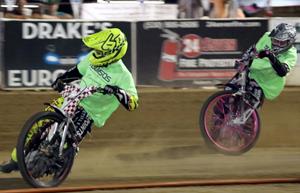 There are many riders that race at Fast Fridays Motorcycle Speedway in Auburn Ca. that can beat nine time AMA National Speedway Champion Billy Janniro, but when it counts they are going to have to try really hard and probably have one of the best races of their careers. Janniro proved that again Friday night at the Gold Country Fairgrounds with a repeat of last week’s double wins in the handicap and scratch programs. He wasn’t prefect as he was last week but came through with the big wins when it counted.

In the scratch program Janniro was perfect except in his semi-final when he had to settle for a second place to Bryan Yarrow for the transfer to the main event. In the main event Janniro lined up against the three other fastest riders of the night leaving no doubt with a great gate winning out of lane three. Again it was Yarrow that gave him the most challenge, but working the outside of the track on the thickest part of dirt left on the track, Janniro used it to his advantage for the win. “We have been trying a couple different engines and seem to have one that kicks butt now,” said Janniro. Janniro likes to work the outside of the track away from the slick blue groove and was able to do that Friday night. “I hate a slick track, I can go as fast as anyone else on a slick track but I need to go just a little bit faster, so you have to go where it works”.

Riding off the 70 yard line Janniro had to work hard for six laps to win the handicap main event again with Blake Borello and Tommy Hedden not making it easy for him. Weaving through traffic Janniro skillfully made up the yardage deficit and got out ahead of Borello and Hedden for the win. Borello rides off the 40 yard line and Hedden sits back on the 50 yard line for start positions. Borello was second and Hedden third.

In Division II Dakota VandenBroeder capped a great goodbye night with a win in the Division II main event. Riding in both Division II and Division III VandenBroeder won her D II heat race and transferred to the main event. She was involved in a crash with John Peters but still managed a win after a restart. VandenBroeder will be beginning military service with the U.S. Army on June 24. “It’s amazing to win second division on my last race and to hear everyone calling my name was a thrill, I am really going to miss everyone here, I love them all,” said VandenBroder. She will be missed by her speedway family at Fast Fridays.

Newcomer Rees Todd is really getting the hang of speedway racing with a repeat of his win last week in the Division III main event. This week his win was off the 10 yard line. Todd just took up speedway racing at the beginning of the season. He now will be getting familiar with the dirt on the 20 yard line. Look for Todd to be in Division II before the season is over. Cody Baugh was second and Dean Newnham was third.

Kyle Cunningham was able to hold on to a win in the Youth 250cc main event even with Landon Norton back to challenge the mix after a couple weeks off because of injury. Norton was second and Dylan Wagner was third. Mike McGrath a consistent top three finisher in the Youth 150cc program pulled off his second main event win of the season. Levi Leutz was second and Brady Landon was third. 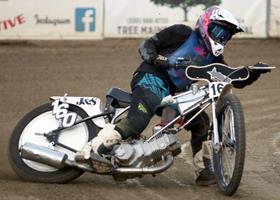 Dakota won her last race at Fast Friday’s in the Division II main event. VandenBroeder enlisted in the U.S. Army and will not be racing in the near future. 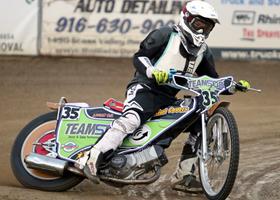 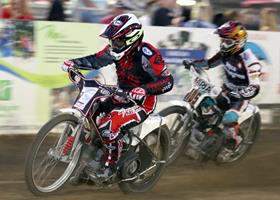 Billy Janniro picked up his second double-double in a row Friday night winning both the handicap and scratch program main events. 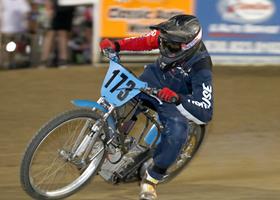 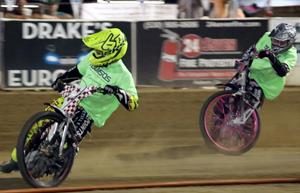 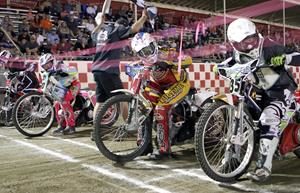