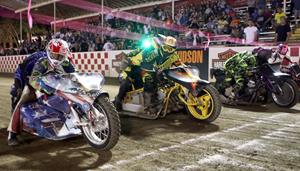 Maybe Billy Janniro was just tuning up to defend his national championship title in the first round of the AMA National Speedway Series Saturday night in Ventura Ca., or just finally finding his groove at the Fast Fridays Motorcycle Speedway Friday night in Auburn because he put it all together winning both the handicap and scratch main events. It wasn’t just winning the main events, Janniro won every time he rolled out on the Gold Country Fairgrounds track in both programs. Janniro won the scratch main event in weeks three and four, but Friday night he was invincible and would lose to no one.

Janniro faced last week’s scratch main winner Charlie Venegas, Russell Green and Bryan Yarrow in the scratch main event. From the gate Janniro grabbed the inside lane and rode perfect keeping ahead of Green who gave chase. It was pretty smooth sailing for four laps as Janniro rode a wheelie across the finish line in his usual fashion. Green was second, Venegas was third and Yarrow fourth.

The handicap main event was a similar story, Janniro, off the 60 yard was successful this week able to work through the lower yardage traffic to win not only his heat race and semi-final but also the main event. It was the first handicap main event win for Janniro this season. Young Anthony Dion who has done such a good job in Division I since his speedy rise from the youth division this season and who has won the last two handicap main events was hanging tough with Janniro until he spun out and lost ground. Tommy Hedden was second and Bart Bast was third.

Casey Cornilsen was able to hold off Sammy Tetrault in the Division II main event. A crash between Will McCloskey and Richard Perkins caused a restart and sidelined Perkins. Tetrault was second and Lawrence McNutt was third. It was his first Division II main event for Cornilsen. Newcomer Rees Todd is getting the hang of the Fast Fridays track winning the Division III main event. Off the zero line he stayed ahead of Dean Newnham another new name at Fast Fridays who finished second. Tim Dion was third. The main event was marred when Jeff Powell who won the DIII main event in week two and three hit the wall hard out of turn two and went down. Powell was injured and unable to leave the track under his own power.

Bringing in the big crowd to Fast Fridays as they always do the Extreme Sidecars made their second of five appearances including the AMA National Sidecar Championship on September 28 put on a great fast paced program. Four teams made the trip to Auburn and tore it up feeding off the near capacity crowd’s enthusiasm. The team of Joe Jones and Josh Flammia won four of the five races including the sidecar main event. The night would have been perfect for the duo except for a tangle with the team of Smylie Kinne and Joshua Bustos in heat three which took out both teams. The team of Robert Curry and Jonny Glover were second in the main event followed by Kinne/Bustos in third and the team of Ace Kale and Chuck Heider finished fourth. “I had a great time, sometimes it is a little scary, the track got a little slick tonight but you just have to deal with it, it’s the same track for everyone,” said Joe Jones. 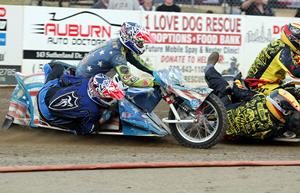 The team of Joe Jones and Josh Flammia won the sidecar main event. 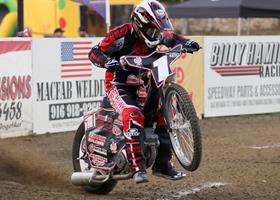 -Billy Janniro gets off the 60 yard line in the handicap program. 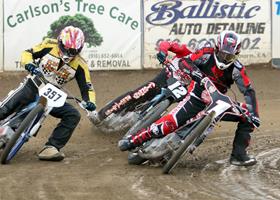 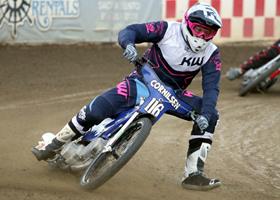 Casey Cornilsen won the Division II main event, his first of the season. 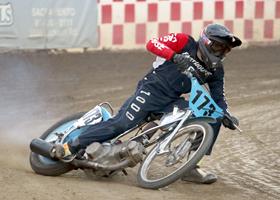 It took just a few weeks for speedway newcomer Rees Todd to figure out how to win the Division III main event. 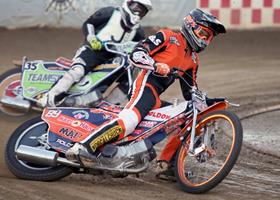 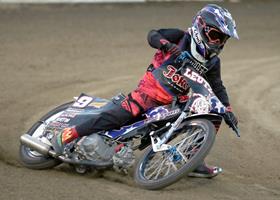 Levi Lutz topped the eight rider Youth 150cc program with a main event win, his first of the season. 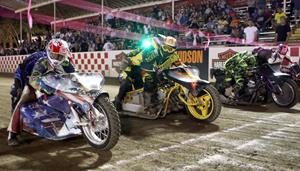 The Extreme Sidecars rolled in to Fast Friday’s putting on a thrilling show for a near capacity crowd of fans. The team of Joe Jones and Josh Flammia won the sidecar main event.