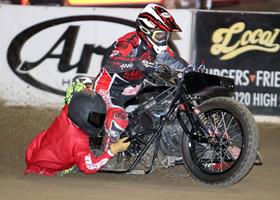 Just when you think you have seen everything Billy Janniro can do on a motorcycle, he pulls something off that you just did not see coming. Friday night at the Fast Friday’s Motorcycle Speedway in Auburn Ca., coming off two weeks of double main event wins, Janniro hops on a sidecar with veteran hack rider Johnny Glover for the first time and did a great job on the high powered three-wheeler mixing it up with the visiting Extreme Sidecars teams.

It was the third visit for the Extreme Sidecars this season to Fast Fridays and in front of a capacity crowd at the Gold Country Fairgrounds the boys along with Janniro put on a thrilling show.

In his rookie ride Janniro and Glover hung in there with the other teams but it was the team of Smylie Kinne and Sammy Tetrault that took the checkered flag in the sidecar main event. “It was a great night, it’s the first time Sammy (Tetrault) and I have raced together,” said Kinne. “Janniro really stepped up, it was good to race against him, he’s aggressive.” Joe Jones and Josh Flammia, favorites in all races, tangled with the track tube and spun out on lap one losing precious ground. This allowed Kinne and Tetrault to capitalize on the misstep and take the lead. But Janniro and Glover were on their tail making the journey to the checkered flag a tough one. Janniro and Glover were second, Ace Kale and Chuck Heider were third and Jones and Flammia were fourth. “I still haven’t got it one hundred percent, I’m struggling a little in the middle of the corners, I could do better if I knew what I was doing really,” said Janniro. “These guys are trying to give me pointers but when that wall is coming at you so fast and they are telling me to give it more gas, it’s like why.” Give the nine time national speedway championship some practice time and a few more laps on a sidecar and watch him win a few sidecar main events also.

In the speedway program the winning continued for Janniro as he won the scratch main event for the fourth week in a row. Visiting speed demon Max Ruml, up for Southern California, made the main along with Bart Bast and Blake Borello. Janniro was in lane two, Bast in four, Ruml in three and Borello sat in one for the start. Ruml and Janniro went at it for a lap or two but it was Auburn’s favorite speedway son Bast that proved to be Janniro’s biggest threat this week. Bast tried but was unable to get closer than a bike length to Janniro who cruised again on his back tire across the finish line first. Bast was second, Borello third and Ruml fourth.

Hard to believe that young Anthony Dion was in the youth program last season and only on a 500cc bike for eight week mixing it up with the likes of Janniro, Bast, Bryan Yarrow, Charlie Venegas, Russell Green and the other veteran riders in division one. But the nearly seventeen year old picked up his third handicap main event win of the season, this week off the 20 yard line. Dion struggled with two third place heat and semi places to get into the main but put it all together when it counted. Watch out for his kid. Bast was second and Janniro third.

Derik Denzin, a returning rider this season to Fast Fridays after two seasons off, won the Division II main event. It was his first main event win of the season. Denzin starts on the 30 yard line and will be getting familiar with the forty yard line dirt next week. He won his heat race to transfer to the main. Michael Wells was second and Matt King was third. Rees Todd again won the Division III main event for the third time this year. He’ll be moving back to the 30 yard line next week. Marc Denniston was second and Dean Newnham was third.

Nick Hohlbein stepped up to defend his last week’s win in the Youth 150cc division with a win in this week’s main event. Colton Nelson again followed Hohlbein with a second place finish and Owen Williams was third. Kyle Cunningham continued to win with his third in a row first place finish in the Youth 250cc main event. Cunningham has won four Youth 250cc main events this season. Cameron Krezman was second and Landon Norton was third.

The Youth riders were all gearing up for the AMA 250cc and 150cc Youth National Championships next Friday on June 12 which will presented at Fast Friday’s along with a full night of speedway racing. Come out and support these young riders as they chase their championship dreams. 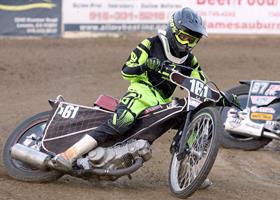 Anthony Dion won this third handicap main event of the season Friday night. Dion jumped into division one from the youth program just this season. 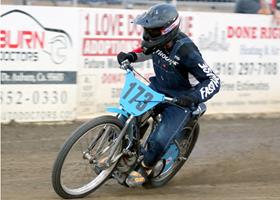 Rees Todd turned in another impressive division three main event win, his third of the year. 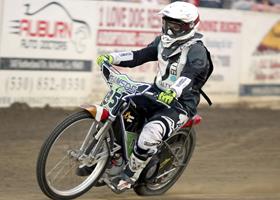 Billy Janniro drove a sidecar for the first time Friday turning with an impressive performance. For a rookie he did a fantastic job in the sidecar program with veteran sidecar hack Johnny Glover. 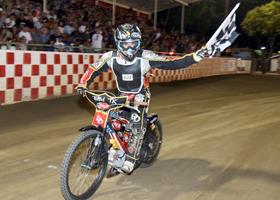 Back this year to Fast Fridays after a two season break Derik Denzin won the Division II main event. 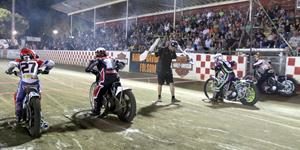