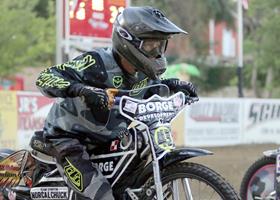 Charlie Venegas came alive in a big way Friday night at Fast Fridays Motorcycle Speedway in Auburn. A veteran of over 30 years of speedway riding and a constant force on any track, Venegas took control at the Gold Country Fairgrounds and won the scratch main event claiming the fastest man of the night title for the second time this season.

Venegas was second in his heat race and won his semi-final to transfer to the main. He faced some of the best in the night’s finale and in of lane four he looked down the line at Billy Janniro next to him in three, Russell Green in two and Bart Bast in lane one. Out of the gate Venegas took control and the lead for all four laps. Nobody gives the main event away and Bast did not make it easy for him by getting right on his tail. Green and Janniro chased right behind him trading places with Bast in the hunt, but the cagy veteran used his vast skill set and rode perfectly to take the checkered flag. Bast followed him in second, Green in third and Janniro in fourth.

Going into the scratch main event Bast already had the handicap main event win under his belt. Bast was having a great night and in the handicap program riding off the 50 yard line he made it look easy. Bast, another very experienced veteran rider with close to 40 years of speedway experience and a rider who knows the Auburn track like the back of his hand made this win look easy. Perfect in his heat, semi-final and then the main, Bast earned and deserved this win with nearly perfect riding. Janniro was second and Bryan Yarrow was third. “It’s my first main event win of the season, I’ve been tinkering with a few clutch things and I have been trying to focus on my starts, that’s been my weak point so far this year,” said Bast.

In Division II Derik Denzin was back on top. After taking a season or two off from speedway racing, Denzin was back on the winner’s podium with his second main event win of the season. Another rider that was perfect Friday night, Denzin won his heat race to transfer to the main then took that race off the 40 yard line. Denzin will be exploring the dirt on the 50 yard line next week in DII and could find himself a regular in Division I soon if he keeps riding like he has been recently. Matt King was second and Shawn Eldredge was third.

Rees Todd is a real quick learner, picking up speedway racing fast. A newcomer to the discipline this season, Todd has become proficient at the sport winning the Division III main event Friday night, his fourth main event of the season, and this week off the 30 yard line. Another rider that will be looking at another start line position 10 yards back next week. Watch what he can do off the 40 yard line. Dean Newnham was second and Marc Denniston was third.

The very popular Team SOS Team Challenge Series was back with round four of the six round series. The score was 31-26 coming into the fourth round with Team SOS leading Rocklin Harley Davidson. Representing Team SOS this week was Bart Bast, Bryan Yarrow, Russell Green, Danny Faria, Anthony Dion and Jeremy Estes. Pulling on the Rocklin HD orange jerseys this week was Billy Janniro, Charlie Venegas, Tommy Hedden, Greg Hooten, Shawn Eldredge and Lawrence McNutt. Riding in teams and scoring three points for a win, two points for second and one point for third, Dion and Estes picked up five points for Team SOS and the team of Janniro and Venegas combining for five points for Rocklin HD. Team SOS scored a total of eight points and Rocklin HD gained a little ground closing the gap by picking up 10 points in the round. The final after four rounds now sits with Team SOS still leading the series 39-36. The exciting team racing continues August 9 with round five.

Landon Norton won the Youth 250cc main event. Looking real smooth Norton finished ahead of Glenn Moore who was second, Alex Martin was third and Dylan Wagner was fourth. Nick Hohlbein was the fastest Youth 150cc rider of the night winning the main event. Colton Nelson was second and Kaytie Kangas was third. Both Norton and Hohlbein finished second in their divisions in the youth national championships just two weeks ago.

Be sure not to miss Fast Friday’s iron man competition next week as the riders take to the track for the 25 lap main. This once a season race tests of endurance of man and machine.

Bast (near) gets set for the start of a handicap race on the 50 yard line. Next to Bast is Tommy Hedden. Bast was perfect in the handicap program winning the main event. 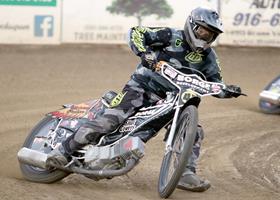 -Rees Todd continued his winning ways in Division II winning the main event, his fourth of the season. 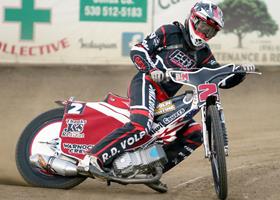 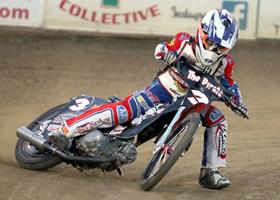 Nick Hohlbein picked up a win in the Youth 150cc main event.

Derik Denzin gets off the line on the way to his second Division II main event win of the season.