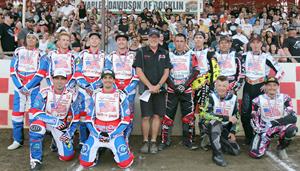 They journeyed from Southern California with one goal in mind and dressed in matching new racing suits the riders representing the South in the 28th annual North vs. South Challenge obtained their objective and beat the North team 77-61. It was a hard fought victory pitting youth against veterans and this time the persistence of the young won out.

Representing the South were Gino Manzares 26, Max Ruml 22, Dillon Ruml 20, Sam Ramirez 19 and Aaron Fox 31. Representing the North was nine time AMA National Speedway champion Billy Janniro 39, Bart Bast 52, Bryan Yarrow 34, Tommy Hedden 46, Charlie Venegas 53 and Russell Green 27. With Fox upping the age average a little to 23.6 for the South and Green bringing the average age down a little for the North to 41.8 it was clearly a young vs. veteran meeting.

The South was looking to avenge their 72-67 loss to the North squad last year and had a well planned strategy in place for Friday’s race at the Fast Friday’s Motorcycle Speedway in Auburn. The format is simple; six riders on each team racing against each other-two pairs at a time in 18 scratch heat races. The heat races scored three points for a win, two points for second place, one point for third and zero points for a fourth placed finish. A bonus round B main and A main followed with increased scoring with each team selecting which riders would ride for extra points. The team with the most points at the end of the bonus rounds is the winner. Keeping the evening exciting was the substituting allowed when one team was six points or more down. A Joker could be inserted once which doubled the score of that rider for that race and a tactical substitute could also made when a team was six points behind, but a rider could only be subbed one time.

For the South paring up the Ruml brothers, Max and Dillon for the evening was brilliant, one of the keys to the South’s success. Together the Ruml’s were tough to beat in all the heat races picking up five combined points for first and second place finishes in all their heat races but one and adding nine points in the A main event with second and third place finishes. Together the brothers scored a total of 38 points for the South. Aaron Fox chipped in 14 points and along with partner Gino Manzares they added 21 points. Austin Novratil and Sam Ramirez added a combined 18 points. “It took Dillon a few races to get in the zone, he has not been up here this year. I’m stoked we were trading off spots, the whole team was awesome, we were all motivated to come up here and win and we did,” said Max Ruml.

For the North Billy Janniro was the high scorer of the evening with 22 total points and paired with Bart Bast they scored 26 points for the North. Bryan Yarrow and Tommy Hedden added 22 points and Russell Green and Charlie Venegas combined for an additional 13 points.

It was a great night of team racing and one of the most exciting North vs. South meetings leaving the combined total of the longest running American speedway event at 18 wins for the North and 10 wins for the South and bragging rights belong to the South for a least another year. 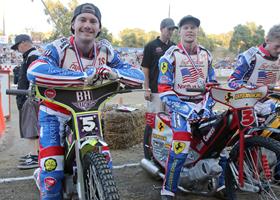 The North team gets ready for the coin toss. 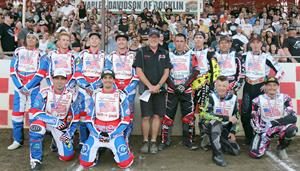 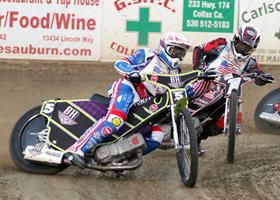 Max Ruml (left) and Billy Janniro (right) get close in a heat race Friday night. Ruml was the high scorer for the South team and North’s Janniro was the overall high scorer of the evening. 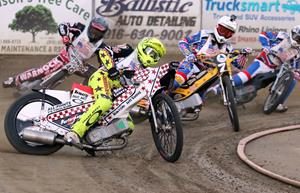 The all scratch racing format provided some tight racing as racers battled in turn one. The North’s Bryan Yarrow leads riders in a heat race. 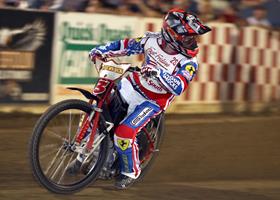 Dillon Ruml had an outstanding night delivering half of a one-two punch with his brother Max Ruml for the South. 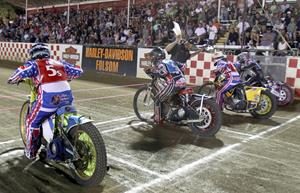 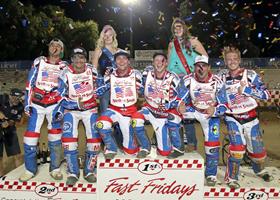 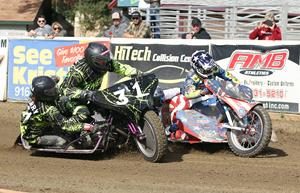 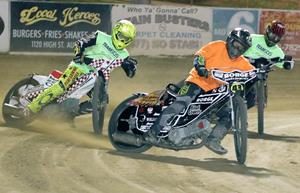 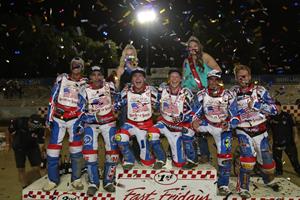 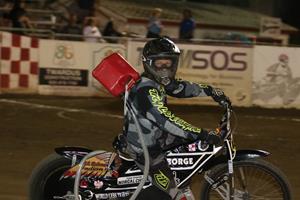 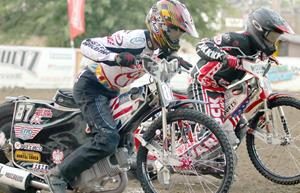