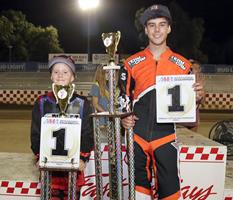 Friday night at Fast Fridays Motorcycle Speedway in Auburn Ca. it was the youth rider’s night to shine. These 26 young riders, some honing their skills for years, took to the Gold Country Fairgrounds track for the  2019 AMA Youth National Speedway Championships in the 250cc and 150cc divisions. By the end of the evening after very aggressive program with over 55 races including a complete regular division speedway program it was Cameron Krezman and Levi Leutz that stood proudly on the winner’s podium with big smiles pasted on their faces as the new 250cc and 150cc AMA National Speedway champions. In the ice bucket near the podium that normally holds champagne this night it was filled with sparkling cider and holding the trophies nearly as tall as them they celebrated wildly with family, friends and the whole speedway community.

The 250cc division was a 16 rider championship program. All 16 riders rode at least once against each other in 20 heat races scoring three points for a win, two for second, one for a third place finish and no points for a fourth place finish. There were no semi-finals races, the new national champ would be determined by the most points at the end of the evening.

Cameron Krezman 15, who missed last year’s championship, seemed to be destined for the win turning in a flawless evening of riding. Facing all competitors Krezman won every race he was in carding a perfect night with 15 points. In second place, weekly Krezman competitor Landon Norton finished with 13 points. Norton dropped only two races with second place finishes to Krezman when they met and Timmy Dion. Another familiar weekly competitor, Timmy Dion finished right behind Norton in third place just one point back with 12 points.  Another regular Fast Friday’s 250cc rider Kyle Cunningham finished fourth with 11 points.

Krezman finished his last heat race headed for his victory lap and as customary pit crews rushed the track lifting him off his bike and tossing him in the air three times. Hugs and high fives followed for the new champion. “It my final year, 500cc’s next year, I have been looking forward to this all year, this is just awesome,” Krezman said.

In the 150cc final it was Leutz and Hohlbein out ahead but followed closely by Nelson. Lutz moved to the front and held on for the victory and the championship. Hohlbein was second, Nelson third and Kangas fourth. As with Krezman, crews from the pits rushed onto the track before Leutz could make a victory lap, throwing him in the air three times with congratulations.

In the regular speedway program Southern California rider Max Ruml made the mileage north pay off winning the scratch main event. Perfect in the scratch program, Ruml won all his races including the main against Billy Janniro, Bart Bast and Russell Green. Ruml jumped right out in front from the gate leading all. Janniro came after him with all he had but could not find enough dirt on the oval to get around him on the outside finishing second. Bast was third and Green fourth.

Young Sammy Tetrault topped the second division in the main event, his second of the season. Tetrault has had three second and two third place finished in DII putting it together with a third place finish in his heat race, then transferring for the win in the main. Tetrault currently rides off the 50 yard line. Look for Tetrault to add division one racing to his resume soon. Tetrault also has been known to get on the back of a sidecar when they come to town.

Carson City, NV resident Jake Estes who makes the trip to Fast Fridays each week picked up the win in the Division III main event. Estes was perfect winning his heat race then the main event. I was his first third division main event win of the season.

Next week one of the biggest events of the season rolls into the tricky dirt oval that Fast Friday’s calls home in Auburn Ca. The longest running team racing grudge match event in modern speedway history the North vs. South Challenge brings its 28th meeting to town. Not to be missed, excellent racing by two very talented teams. 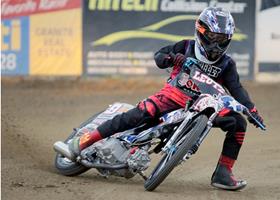 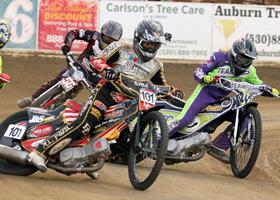 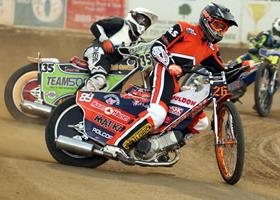 Cameron Krezman was perfect in all his races winning the 2019 AMA National 250cc Youth Speedway championship. 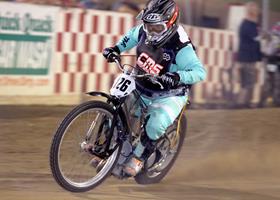 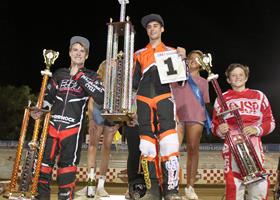