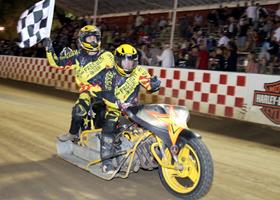 The Extreme Sidecars returned to Fast Fridays Motorcycle Speedway in Auburn Friday night for the fourth time in their 2019 series. The sidecars dazzled the near capacity Fast Fridays crowd with their special brand of adrenaline fueled racing.

Four teams took to the dirt oval at the Gold Country Fairground for four heats and a main event. Bryan Motis was in the driver’s seat of one of the machines briefly coming out of retirement. It was the team of Smylie Kinne and Joshua Bustos that had the best night with two second place finishes and three first place finishes including the sidecar main event. “We tried some new things tonight that I have been afraid to try before,” said Kinne. “We can’t wait for the national championships.” The team of Motis and Eric Hernandez were second in the main event, Robert and Lori Curry were third and in a first turn mishap that disabled them, the team of Joe Jones and Josh Flammia finished fourth.

Sidecar fans remember that on September 28 the sidecars return to Auburn for the AMA National Sidecar Championship. Sixteen teams will go at it for the number one AMA plate right here at the Fast Fridays Motorcycle Speedway track.

Billy Janniro locked up the fastest man of the night title again Friday night. Nine time AMA Speedway National champion Janniro was getting set for the second round in the three round 2019 AMA National Speedway championship series Saturday night in Southern California. In the scratch program Janniro just turned it on “The Kid” was just unbeatable winning his heat race, semi-final race and the scratch main event. Out of gate four, Janniro wasted little time getting down to business taking the lead in turn one, a lead he would never relinquish. Tommy Hedden chased him for the four laps but could only come within a bike length of catching him. In Janniro style he came across the finish line on his back tire, as the crowd cheered approval. Hedden was second, Greg Hooten Jr. third. Charlie Venegas made the main but was disqualified for rolling through the tapes at the start.

The win was a repeat of last week and the eighth time Janniro has won the scratch main event at Fast Fridays this season. To say Janniro is dominating the scratch program at Fast Fridays would be a understatement. It is well worth the price of admission just to see what he is doing on a speedway bike each week, riding in top form-the best in his career and like no other speedway rider has ever ridden before.

Anthony Dion put on quite a show in the handicap main event, winning at tapes with a stunning inside passing move on the last turn, swiping the race from Chance Grove by inches. Dion, who starts on the 30 yard line, in the handicap program has made a lighting fast climb to the top in Division I from the youth program last season. Dion won his heat race, was third in his semi-final race and then won the main event in championship style. Grove was second and Bart Bast was third. “In that last race I could see I could sneak up on him on the inside so I took my chance, went for it and it worked out well,” said Dion. “I’m getting more used to the bike and it’s paying off.” 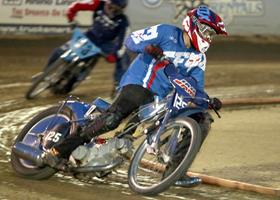 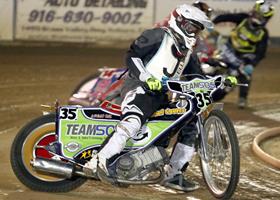 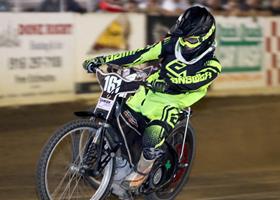 Anthony Dion getting serious on the track on his way to a stunning win in the handicap main event. 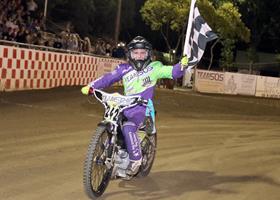 Sammy Tetrault took a victory lap around the track after winning the Division II main event.

The start of the sidecar main event in front of a near capacity crowd.