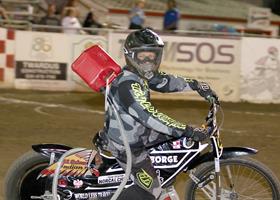 Auburn has earned the moniker “Endurance Capital of the World” for the athletic feats of endurance staged in the area. Many of the events are known worldwide and attended by participants who travel long distances to the area to participate. Friday night Fast Friday’s Motorcycle Speedway presented its take on endurance feats with its annual 25 lap main event. At the Gold Country Fairgrounds twelve riders that made the handicap semi-final races all transferred to the final race of the night a 25 lap finale. All regular handicaps were doubled with some riders starting half way around the track. The riders all left in a cloud of dust and as Fast Fridays staff moved to make sure of the lap count the riders rode lap after lap.

In a little over six minutes and as the dust settled it was Louie Mersaroli that emerged as the 2019 Fast Friday’s Iron Man. The 23 year-old Auburn resident who began speedway racing eight years ago in the junior ranks hung on for the grueling run. “I wasn’t even going to go for it all, but I was feeling pretty good out front and I felt I could pace myself and hold on to first place,” Mersaroli said. “It definitely wasn’t easy and a real workout.” Mersaroli started on the 80 yard line, long yardage riders were handicapped back as far as the 140 yard line, nearly three quarters of the track back. Young Anthony Dion who was handicapped on the 60 yard line endured for second place and showing that even veteran riders could keep up Bart Bast finished third handicapped to the 120 yard line. The race was a true test of man and machine.

The fastest man of the night at four laps proved to be Billy Janniro. Janniro, again perfect in the scratch program won the scratch main event. Against Mersaroli, Bast and Russell Green, Janniro racing out of the far lane four took the lead out of the gate and didn’t look back. Green made an admirable effort but could not catch the champ. Green was second, Bast third and Mersaroli fourth. Janniro has won seven scratch main events this season at Fast Fridays and has appeared in every scratch main event except one.

Derik Denzin racked up back to back Division II main event wins. It was an exciting race between Denzin and Casey Cornilsen with Denzin just pulling it off the win at the tapes. Denzin has three DII main event wins this season. Not new to speedway, Denzin took two seasons off and has wasted little time gaining a strong foothold back in Division II. He also has had a few rides in Division I programs and riding off the 50 yard line in DII there is nowhere to go but up. He should make a solid rider in Division I. Casey Cornilsen was second and Lawrence McNutt was third.

Dean Newnham took the Division III main event for the second time this season. Newnham won his heat race transferring to the main. Ray Holt Jr. was second and LC Veale was third.

Timmy Dion had a strong night riding nearly perfectly winning both his heat races, transferring to the Youth 250cc main event and winning the finale also. Dion got greats gates and rode smooth lines all night. Gregg Moore also had a great night finishing second and Landon Collins was third. Darren Armbruster had a great race in the Youth 150cc main event making a bold move over Auburn’s Colton Nelson on the last turn for the win. Nelson was second and Nick Hohlbein was third.

This Friday look for the return of the Extreme Sidecars as they return for their fourth appearance at Fast Fridays Motorcycle Speedway this season. 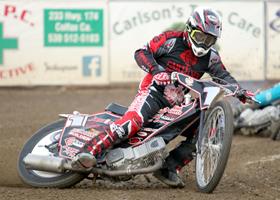 -Billy Janniro proved to be the fastest man of the night with a win in the scratch main event. 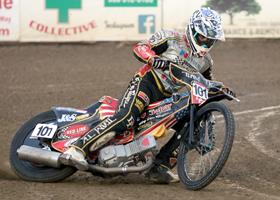 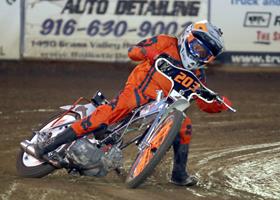 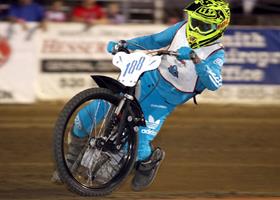 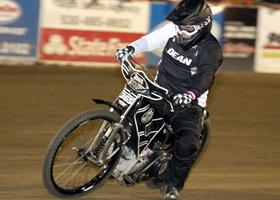 Always the innovator, Charlie Venegas devised an auxiliary fuel system for his speedway bike for the grueling 25 lap endurance event Friday night at Fast Fridays. Running out of fuel is a concern in the long distance race.