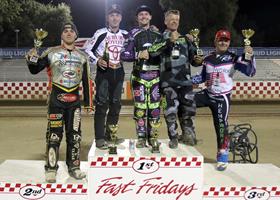 On a roll after winning the California State Championship last weekend at the City of Industry Max Ruml 22, of Costa Mesa came north and made it look easy. Sixteen of the top division one riders in the points standings were eligible for the track championship based on points earned during the regular season. The format was five rounds of twenty event races with each rider meeting at least once, scoring points for finish position. Three points for a win, two for second place, one for third place, zero for fourth. The rider with the most points at the end of the evening claims the Fast Friday’s Motorcycle Speedway championship and a year’s worth of bragging rights.

Ruml, scored a perfect 15 points for the championship win. Keeping pace with the 22 year old, veteran rider Charlie Venegas also had a fantastic night with a perfect score along with Ruml going into final Event 20 that would decide the championship breaking the tie. Ruml and Venegas were tied with a perfect 12 points each. Racing fast and hard Ruml and Venegas both gated well and were running tight together on the first lap. On the second lap both riders were making a move on the straightaway and got a little to close locked up and Venegas went down into the wall. Shaken a little both riders chalked it up to hard racing and a restart was called for by referee Steve Lucero though Venegas was unable to make the start because of mechanical problems that unfortunately kept him out of the running.

In the restart Ruml was able to keep his night perfect with a win over Bart Bast who finished second and Ryan Bast was third in Event 20. With Venegas unable to score any points in Event 20 and finishing the program with 12 points he tied with Bart Bast who also finished with 12 points. Rules call for a run-off if ties result for first thru third places. On a barrowed bike Venegas rolled to the start line for the run-off with Bast. On the first lap though his bike gave out and unfortunately Venegas could not continue and Bast ran the laps out to take second place in the track championship, Venegas ending up with third place in the track championship. It was a great night of championship racing by all racers.

Others riders having great showings in the championship were young Anthony Dion 17, who was a junior rider last season making a huge impact in the Division I program this season finishing fourth overall in the championship. Ryan Bast and Tyler Warren, both riding only a few races this season both also showed well in the track championships with fifth and sixth finishes.

The Division II and Division III Fast Fridays track championships were also on the line Saturday night with a little different format. Eight of the top division riders based also on points were grouped into heat races with the top two riders transferring to a main championship race in each division. In the Division II main event Will McCloskey, Lawrence McNutt, Derik Denzin and Matt King survived the heat races for the main championship event. Denzin came out on top with a perfect evening and claimed the DII Fast Friday’s Track Championship. King was second, McNutt was third and McCloskey was fourth. Denzin was back this season after not racing for three years and was impressive all season. He most likely will make a great addition to Division I next season.

The smile on Ray Holt Jr. face could not have been bigger after winning the Division III main event Saturday night. The fifty-nine year old racing in his fourth season was able to put it together in his heat race and the main event to win the DIII Fast Friday’s Track Championship. Holt Jr. faced Bryan Leventon, LC Veale and last year’s DIII champion Jake Estes in the main. Estes finished second, Veale third and Leventon fourth.

SOS Team Challenge Round 6 (Final Round) 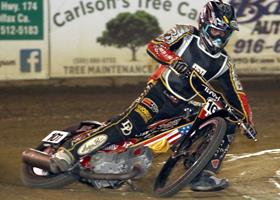 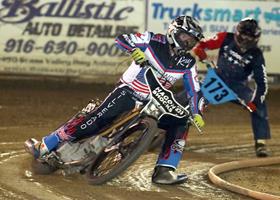 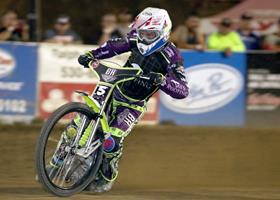 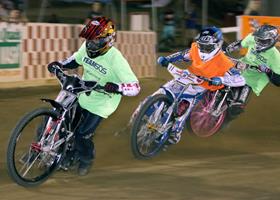 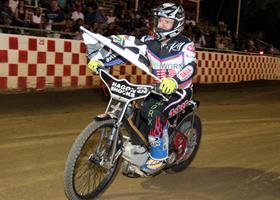 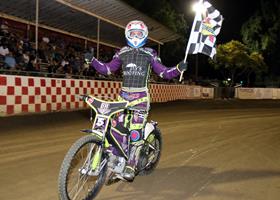